Capsulitis of the Second Toe

What is Capsulitis of the Second Toe?

Ligaments surrounding the joint at the base of the second toe form a “capsule,” which helps the joint to function properly. Capsulitis is a condition in which these ligaments have become inflamed.

Although capsulitis can also occur in the joints of the third or fourth toes, it most commonly affects the second toe. This inflammation causes considerable discomfort and, if left untreated, can eventually lead to a weakening of surrounding ligaments that can cause dislocation of the toe. Capsulitis—also referred to as pre-dislocation syndrome—is a common condition that can occur at any age.

It is generally believed that capsulitis of the second toe is a result of abnormal foot mechanics, where the ball of the foot beneath the toe joint takes an excessive amount of weight-bearing pressure.

Certain conditions or characteristics can make a person prone to experiencing excessive pressure on the ball of the foot. These most commonly include a severe bunion deformity, a second toe longer than the big toe, an arch that is structurally unstable, and a tight calf muscle.

Because capsulitis of the second toe is a progressive disorder and usually worsens if left untreated, early recognition and treatment are important. 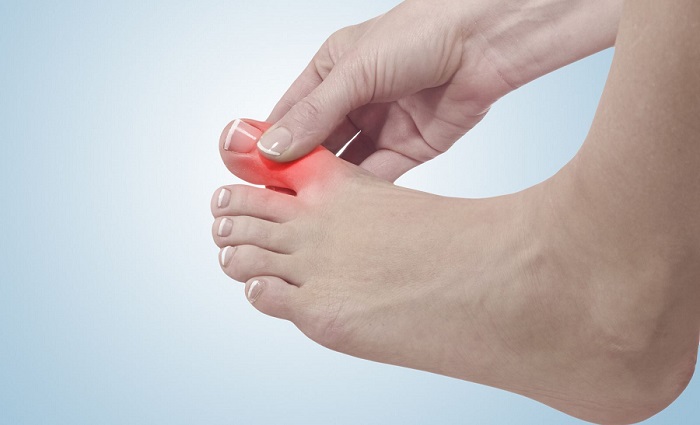 Corns like calluses develop from an accumulation of dead skin cells on the foot, forming thick, hardened areas. They contain a cone-shaped core with a point that can press on a nerve below, causing pain. Corns are a very common ailment that usually form on the tops, sides and tips of the toes. Corns can become inflamed due to constant friction and pressure from footwear. Corns that form between the toes are sometimes referred to as soft corns.

Some of the common causes of corn development are tight fitting footwear, high heeled footwear, tight fitting stockings and socks, deformed toes, or the foot sliding forward in a shoe that fits too loosely.

Soft corns result from bony prominences and are located between the toes. They become soft due to perspiration in the forefoot area.

Complications that can arise from corns include bursitis and the development of an ulcer.

There are very simple ways to prevent and treat the corns. You should wear properly fitted footwear with extra room in the toe box (toe area). Avoid shoes that are too tight or too loose. Use an orthotic or shoe insert made with materials that will absorb shock and shear forces. Also avoid tight socks and stockings to provide a healthier environment for the foot. Try to steer away from corn removing solutions and medicated pads. These solutions can sometimes increase irritation and discomfort. Diabetics and all other individuals with poor circulation should never use any chemical agents to remove corns. Treatment from a Podiatrist will elevate the pain.

We use cookies on our website to give you the most relevant experience by remembering your preferences and repeat visits. By clicking “Accept All”, you consent to the use of ALL the cookies. However, you may visit "Cookie Settings" to provide a controlled consent.
Cookie SettingsAccept All
Manage consent

This website uses cookies to improve your experience while you navigate through the website. Out of these, the cookies that are categorized as necessary are stored on your browser as they are essential for the working of basic functionalities of the website. We also use third-party cookies that help us analyze and understand how you use this website. These cookies will be stored in your browser only with your consent. You also have the option to opt-out of these cookies. But opting out of some of these cookies may affect your browsing experience.
Necessary Always Enabled
Necessary cookies are absolutely essential for the website to function properly. This category only includes cookies that ensures basic functionalities and security features of the website. These cookies do not store any personal information.
Non-necessary
Any cookies that may not be particularly necessary for the website to function and is used specifically to collect user personal data via analytics, ads, other embedded contents are termed as non-necessary cookies. It is mandatory to procure user consent prior to running these cookies on your website.
SAVE & ACCEPT